September 25, 2015
On Monday 21 September, as part of my British Library Labs project, we held a Chartist day and walking tour around West London.


The Political Meetings Mapper has uncovered over 125 venues in London used for Chartist meetings in the 1840s. The BL Labs team took over 30 academics and members of the general public round a tour of some of the sites that I found still standing today.

We were pleased so many people turned up in costume, and everyone got to wear a traditional red, cream and green rosette!
Thanks to every one for coming along, and braving the rain. Thanks also to Mahendra Mahey of the BL for doing the running round organising logistics, and to Adam Lloyd Jones for the filming.

We began with some talks in the Foyle Centre for Conservation conference suite. Mahendra Mahey introduced the work of BL Labs. I then discussed the Political Meetings Mapper and gave a background to Chartism, the largest movement for democracy in 19th century Britain. Dr Matthew Sangster of Birmingham University explored his digital mapping project, Romantic London (http://www.romanticlondon.org/ ), using Richard Horwood’s 1799 map of London. Professor Ian Haywood of Roehampton University talked about the Chartist ‘monster meetings’ of the 1840s, particularly Kennington Common in 1848, and revealed some exciting new evidence about the Birmingham Bull Ring riots of 1839.

We then set off on our tour of London venues. The group braved the pouring rain, and succeeded in getting round all the points on the tour map.

Here's part of the guide to all of them:


This is on the site of the British Library, probably nearer where the new science centre is being built opposite the back entrance to St Pancras station.

You can see Philips Buildings on this 1834 map of the St Pancras area:

Here's a parliamentary report from 1817 showing how the landlord had been convicted of allowing illegal gaming on the premises at least twice:

The Northern Star reports concerts for the benefit of the Political Victims and Defence Fund, following the ‘Plug strikes’ and arrests after the mass Kennington Common meetings to present the second national petition in August 1842:


Illustrated London News, 20 August 1842, ‘departure of troops by the London and Birmingham Railway’ 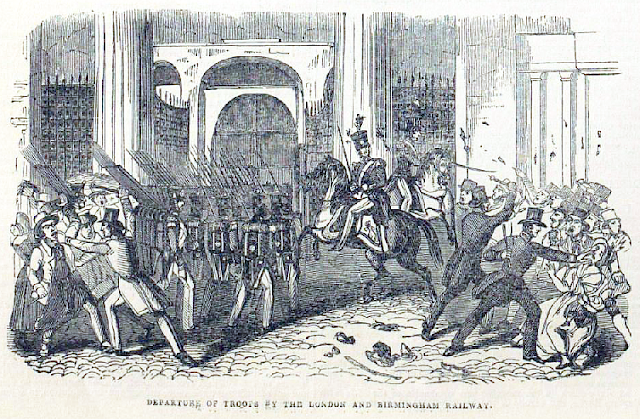 LONDON AND BIRMINGHAM RAILWAY, SUNDAY, ― This morning, as early as nine o’clock, another troop of Royal Horse Artillery arrived from Woolwich at the Euston Station of the London and Birmingham Railway, with three field pieces and ammunition.  About 4 o’clock, the Quartermaster of the 34th Foot, from Portsmouth, attended by an orderly, arrived, and ordered refreshment to be procured from the various public-houses for that regiment, which was en route by the South Western Railway from Portsmouth.  The great excitement at this time prevailed, the Quartermaster being obliged to be escorted from the various public-houses by the police.  In an hour after, two waggons, laden with ammunition and guarded by several soldiers of the 34th came up, and was shortly after followed by the regiment, under the command of Colonel Airey, consisting of 600 men.  On their arrival they were greeted by the most discordant yelling by the mob, and it was as much as the police could do to prevent them from forcing an entry into the railway yard.


We went up to the upper room of this pub to try to imagine a speech like this being spoken in this venue. The room was fairly small, and only just fit the 30 of us, though we can't be sure that this was the original configuration of the pub in the 1840s.


Horwood's map of 1799 - note the Middlesex Hospital opposite (which we could see) and Covent Garden Workhouse. 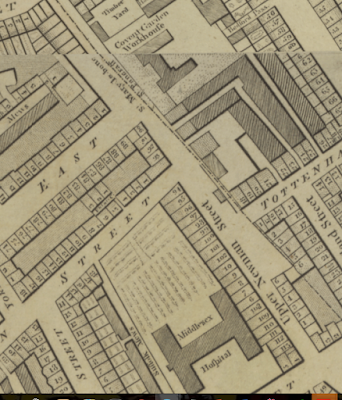 The Boot and Shoemakers held their annual conference in this pub.

An important feature of London Chartism, as I outlined in my previous blog post, was its trades-based organisation. So we then walked through Soho, the main district for tailors in London, where the pubs were traditionally used as houses of call for tailors, and therefore the tailors naturally used them when they formed their own Chartist branches (see
D. Goodway, London Chartism, 1838-1848 (Cambridge, 1982), p. 172).

Some of our group also spotted several tailors' signs in the upper windows of buildings, still operating today, so this remains very much a tailoring area.

The Two Chairman was the main house of call for journeymen tailors.

We ended up at the Red Lion on Kingly Street, Soho, which had been not only a Chartist and tailors’ trade union venue in the 1840s but also a meeting place of branch number 21 of the London Corresponding Society in November 1792. 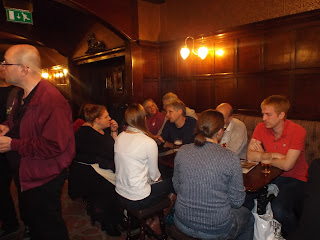 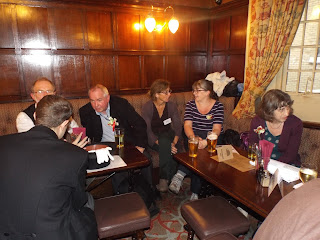 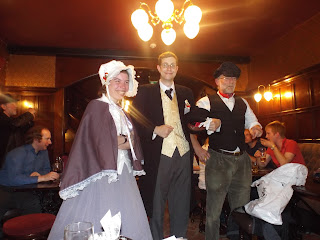 In the upstairs bar, volunteers in costume re-enacted one of the Chartist meetings using reports found in the digitised newspapers. The lively audience participated by passing resolutions in favour of universal suffrage (the vote for all men), and the People’s Charter.

A video of the event will be available soon.


UPDATE! -
Hannah Awcock and Mark Freeman have written lovely blog entries about their experience of the event:
http://turbulentlondon.com/2015/10/01/following-the-chartists-around-london/

September 30, 2011
I'm currently working on various seminar papers, and the mood among many historians is that we need theory back in history. James Vernon made an impassioned plea for a return to theory in his plenary lecture for the 2011 Social History Society conference. Basically his message was 'what are we afraid of?' A focus on empiricism has meant we have lost sight of the big ideas, and the big frameworks that shape history. The SHS used to have a theory strand for its conference, but we dropped it a few years ago because the number of papers offered was in decline. In response to Joyce, however, the SHS has reintroduced the 'theory and methods' strand for the next conference. Perhaps this is a sign that theory is back on the agenda. I too have neglected theory for the past few years. I went on a cultural geography bender in the last year of my DPhil research, and also immersed myself in social movement studies. My first article, 'The Search for General Ludd' was im
Read more

April 18, 2013
Last week I was writing up my research on the use of effigies in popular protest. This proved serendipitous timing given the events of the past week. Here is the Yorkshire Post's report on the burning of effigies of Margaret Thatcher in the former mining town of Goldthorpe. According to Charles Tilly's typology of the development of protest, effigy burning was an 18th century form of local customary and rural protest that should have died out by the 19th century, with its more 'modern', bureaucratic, less violent collective action directed at parliament.  Yet effigy burning was very much a part of 19th century urban popular protest, and as we have seen this week, continues today. Effigy burning was of course part of the regular customary calendar on 5 November, but it also featured regularly during elections and increasingly in the early nineteenth century, in a wide range of protests and campaigns. Why do people make and burn effigies in protest? There are,
Read more