Luke Fowler, 'The Poor Stockinger, The Luddite Cropper and the Deluded Followers of Joanna Southcott'

August 02, 2012
Turner-prize nominee Luke Fowler's film essay, 'The Poor Stockinger, The Luddite Cropper and the Deluded Followers of Joanna Southcott' is currently showing at the Hepworth Gallery, Wakefield until mid October. It will be the first moving image piece in their permanent collection. 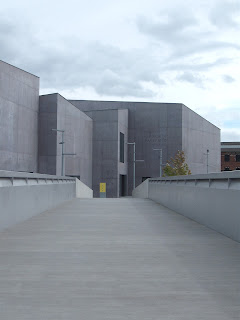 To set things straight for the historians first of all, this is nothing to do with the eponymous early 19th century characters of the title, whom Thompson sought to 'rescue from the enormous condescension of posterity'.

Rather, it focuses on Thompson's own reflections on teaching WEA classes in the West Riding of Yorkshire in the early 1950s. Indeed, those stockingers, croppers, millenarians, and the handloom weavers and artisans that Thompson believed to be the linchpin for the making of the English working class between 1789 and 1832 were, by the 1950s, notably long gone from Bingley, Cleckheaton, Batley, Bradford, Keighley, and other industrial towns and villages. Thompson taught factory workers, miners, and perhaps a clerk or two.

Thompson's thoughts on William Blake bookend the film, and set the tone. Here was a young visionary, revolutionary, intellectual, perhaps in touch with the rough-edge diamonds of working-class thought, but on the other hand, on a different plain from them.

There is also an underlying political argument woven into the piece, an argument set out by Thompson in his 1950 paper 'Against University Standards'. In this he opposed the idea that the WEA should require their classes to adopt a 'university attitude'. He regarded this move as 'indoctrination' and detrimental to the purpose of the institution as 'education for a social purpose' (and fulfilling a Marxist endeavour to educate the working classes as the working classes, not as an elite bourgeosie). This element of the essay is, however, underplayed, and indeed although the WEA mention it in their note of the film, they move breezily on to their current mission.

The majority of the piece consists of Wyn Evans rilily reading excerpts from Thompson's reflections on his various WEA classes. These are juxtaposed with images of the contemporary state of the post-industrial towns, their empty classrooms and boarded-up buildings. Sometimes these are deliberately pointed about the decline of workers' education (a Victorian technical school with a for sale sign hung forlornly on it), others more like Yorkshire versions of George Shaw's gentle reflections of post-industrial suburbia. The colours are muted greys, browns, yellows. The landscapes of the Spen and Calder valleys are as if seen through a rain-specked dirty windscreen, or indeed, the windows of the old buildings that hosted the classes.

As a lecturer, what is most striking about the quotations is their familiarity. Thompson complains of poor attendance due to the weather, family and debt problems. At Halifax, his appeals to students to undertake their own research projects was met with indifference and a low level of achievement. He seemed particularly disappointed by their lack of effort and care. Some of the problems preventing students from engaging were understandable in the context of workers living just above the breadline in postwar northern England.

Thompson posited a deeper reason for the lack of engagement. He was teaching the classic late 18th and 19th century history of industrialisation and the rise of socio-political movements. He initially believed that this would be bread and butter to the workers of the West Riding communities, steeped as they were in trade unionism and living in those same industrial environments. Yet by the early 1950s, he saw that the trade unionists were no longer seeking the 'march of the mind' in WEA classes, or at least not in his. He considered whether the social history of the 'bottom up' should be abandoned, and different topics approached. But he had no answer. This was his mission, in part marxist, in part moral, to teach workers about their heritage (and their own missions in the Marxist framework, though never so overtly), and he could not teach anything other. A poignant quotation explained his disappointment - he was saddened that his students were misguided into just seeking the 'right' answer to fit their schema: 'they have grown used to the idea of social history as a prelude to the welfare state'. [Alas, today now our students don't even think in that trajectory].

Finally, another point struck me from the film from a lecturer's point of view. The 'teaching and learning' practitioners (who teach the now ubiquitous postgraduate certificates in higher education teaching) seem to preach a particular gospel. They like to proclaim that 'we're the first to understand how to teach and how students learn because we're the first to be doing self-reflection. All the older lecturers are stuck in their old non-reflective ways'. Yet here Thompson showed that there is nothing new about this. The best lecturers and teachers had always practised self-reflection, even in the 1950s.

September 30, 2011
I'm currently working on various seminar papers, and the mood among many historians is that we need theory back in history. James Vernon made an impassioned plea for a return to theory in his plenary lecture for the 2011 Social History Society conference. Basically his message was 'what are we afraid of?' A focus on empiricism has meant we have lost sight of the big ideas, and the big frameworks that shape history. The SHS used to have a theory strand for its conference, but we dropped it a few years ago because the number of papers offered was in decline. In response to Joyce, however, the SHS has reintroduced the 'theory and methods' strand for the next conference. Perhaps this is a sign that theory is back on the agenda. I too have neglected theory for the past few years. I went on a cultural geography bender in the last year of my DPhil research, and also immersed myself in social movement studies. My first article, 'The Search for General Ludd' was im
Read more

April 18, 2013
Last week I was writing up my research on the use of effigies in popular protest. This proved serendipitous timing given the events of the past week. Here is the Yorkshire Post's report on the burning of effigies of Margaret Thatcher in the former mining town of Goldthorpe. According to Charles Tilly's typology of the development of protest, effigy burning was an 18th century form of local customary and rural protest that should have died out by the 19th century, with its more 'modern', bureaucratic, less violent collective action directed at parliament.  Yet effigy burning was very much a part of 19th century urban popular protest, and as we have seen this week, continues today. Effigy burning was of course part of the regular customary calendar on 5 November, but it also featured regularly during elections and increasingly in the early nineteenth century, in a wide range of protests and campaigns. Why do people make and burn effigies in protest? There are,
Read more