March 07, 2017
Although I spent the last blog complaining of an over-emphasis on flaneurs and psychogeography, in effect I did a mini-derive across north Manchester last week. Hypocritical, I know...

Here are my field notes. I will develop these into a proper deep-mapping study of the sites over time soon.

My most important finding was that walking radially, east to west, across the spokes of the main roads that lead into the centre of Manchester, is not an obvious or natural direction. The sites are not far from each other, but feel isolated and definitely worlds apart. I'm still working out whether they would have felt so in the early 19th century.

2/3/17
Started at Piccadilly, down Ducie Street, and down Great Ancoats, from warehouse conversions and the canal to some old-school post-industrial 80s pomo retail units. Very polluted road; I had to hold my scarf against my face to block the fumes. Masses of tightly packed new apartments on the road. Turned onto Every Street, completely redeveloped flats everywhere apart from the scrubby patch of grass and Scholefield's chapel (the 'round chapel', site of radical and Chartist meetings and a radical Sunday School) and small 80s terraces nearby.

Silver birch trees against a clouded over sun - bracken - litter. Eroded gravestones circling the foundations of the round chapel. No plaque or indication of what the chapel was apart from a small stone set in the wall, and the memorial stone to Reverend Scholefield on the far side of the 'park' - I had to move some recently blown down large branches to take a look. Difficult to work out where Henry Hunt's monument would have been.

Walked past the derelict church next to the scrubland, crossed the road and up Carruthers Street, past the newish St Anne's RC. Through New Islington. Urban Splash hits and misses in their urban regeneration. Weirdly oppressive coal black new terraces and odd 'public realm' features in a traffic calming feature, and what I can only describe as 'vernacular pomo' housing.


Kids being walked home from primary school. Slightly uphill cutting through the roads into Manchester. More derelict factories and workshops until George Leigh Street. Radical centre number 2, site of the political union rooms in the 1810s.

Up New Allen Street, passing a Lucy's box (always a touchstone for me - I used to live near the factory next to Oxford Canal and watched the wrecking ball pull it down) to the hacked off end of the old railway viaduct. Still blackened bricks, arches of rubbish.


Latchkey kids riding round the estate on bikes, circling, heckling.
Turned left onto Osborne Street, formerly the most radical street in 19th century Manchester. A couple of rows of 1970s? terraces. Brick porches need some work. Very isolated. Views of central Manchester so close but yet so distant from here. Feel completely isolated from George Leigh Street and Every Street. 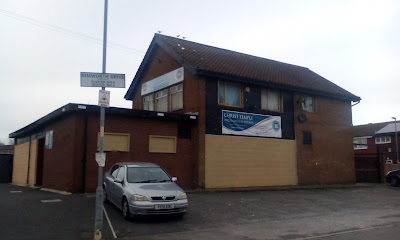 Yet turn back down towards Oldham Road, and there is certainly a feeling of pulling back towards the city centre. The spoke draws you inwards, but not across.
geography Manchester psychogeography radicals 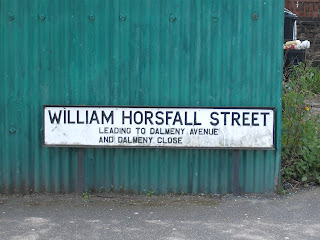